We welcome all applications for children to join our school.  We strongly encourage prospective parents to visit the school before making an application on behalf of their child(ren).

Please note that some of these deadlines and the process for hearing appeals may change depending on the national situation as a result of Covid-19.  You will be informed on a case by case basis.

Appeals for September 2021 resulting from year of entry or transfer applications:

NB: Appeals will not start being heard until after the relevant closing date has passed.

Appellants must ensure that any further evidence not included with their initial appeal, is received by 5pm on the day preceding three clear working days prior to the appeal hearing date.  Any additional evidence or information received after this date might not be considered at the appeal hearing.

In year or immediate entry appeals

Appeals resulting from in year admission applications will be heard within 30 school days of the appeal being lodged.

For information on how to make an appeal, please visit:

At Sythwood Primary and Nursery School we adhere to the principle that every child matters and that all children have the right to enjoy and achieve to the best of their ability in a safe, happy and secure learning environment which encourages them to grow as global citizens. We believe that a strong partnership with parents encourages children to reach their full potential.

Sythwood Primary and Nursery School is an Academy co-educational school for children aged 4 - 11 years old and is situated in Woking with a Nursery which takes children from the age of 2.

For entry into Reception during the 2021/22 academic year, Sythwood Primary School has a published admission number (PAN) of 90.

There is a single intake into Reception.  All children whose date of birth falls between 1 September 2016 and 31 August 2017 will be eligible to apply for a full time place in Reception at the school for September 2021.

Applications for Reception September 2021 intake must be made by 15 January 2021. Parents will be asked to rank up to four preferences and these will be considered under an equal preference system. Places at Sythwood Primary and Nursery School will be offered on the basis of the oversubscription criteria listed below. Applications received after 15 January 2021 may be considered as late and will be considered in accordance with Surrey’s Coordinated Admission Scheme.

All applications for admission to year Reception, after the start of the academic year in September, and for years 1-6 will be treated as in-year admissions.

Application for in-year admission must be made to Surrey County Council (either through their website or by phoning 0300 200 1004). Where there are more applications than places available, each application will be ranked in accordance with our published oversubscription criteria.

Applications for a place in our Nursery are made direct to our schooI. If you would like more information, or to arrange a visit to our nursery, please contact 01483 770063 or email nursery@sythwood.surrey.sch.uk

Admissions outside of chronological year group

Applicants may choose to seek a place outside their child’s chronological (correct) year group. Decisions will be made on the basis of the circumstances of each case and what is in the best interests of the child concerned.

Applicants who are applying for their child to have a decelerated entry to school, i.e. to start later than other children in their chronological age group, should initially apply for a school place in accordance with the deadlines that apply for their child’s chronological age. If, in liaison with the Head of School, the admission authority agrees for the child to have a decelerated entry to the school the place cannot be deferred and instead the applicant will be invited to apply again in the following year for the decelerated cohort.

Children whose Statement of Special Educational Needs/EHCP names a school will be allocated a place before other applicants are considered. In this way, the number of places available will be reduced by the number of children with a statement/EHC plan that has named the school. Should Sythwood be oversubscribed for any year group, applications for entry in 2021/22 will be ranked in the following order:

THIRD PRIORITY: Children who will have a sibling at the school at the time of the child’s admission. See below for further information relating to siblings.

FOURTH PRIORITY: Children of staff who are employed at the school for more than 2 years or who meet a skills shortage.

FIFTH PRIORITY: Children for whom the school is the nearest to their home address.

SIXTH PRIORITY: Any other children.

If there is oversubscription within any criterion, then applicants will be prioritised on the basis of nearness to the school measured in a straight line from the address point of the pupil’s house, as set by Ordnance Survey to the nearest official school gate for pupils to use. This is calculated using the Admission and Transport team’s Geographical Information System. See below for further information on the definition of home address. Where two children live equidistant from the school and only one place remains, lots will be drawn to determine which child should be given priority.

In the case of multiple births, where children are ranked consecutively in their order of priority for a place and there are not sufficient vacancies remaining for each of them, wherever it is logistically possible, each child will be offered a place. Where it is not logistically possible to offer each child a place the child(ren) to be offered the last remaining place(s) will be determined by the rank position of each child.

Occasionally there will be a very small number of children for whom exceptional social or medical circumstances will apply which will warrant a placement at a particular school. Supporting evidence from a professional is required such as a doctor and/or consultant for medical cases or a social worker, health visitor, housing officer, the police or probation officer for other social circumstances. This evidence must confirm the circumstances of the case and must set out why the child should attend a particular school and why no other school could meet the child’s needs.

Providing evidence does not guarantee that a child will be given priority at a particular school and in each case a decision will be made based on the merits of the case and whether the evidence demonstrates that a placement should be made at one particular school above any other. Places may be allocated under this criterion when places are first offered at a school and the Local Authority may also ask schools to admit over their Published Admission Number at other times under this criterion.

A sibling will be considered to be a brother or sister (that is, another child of the same parents, whether living at the same address or not), a half-brother or half-sister or a step-brother or step-sister or an adoptive or foster sibling, living at the same address. A child will be given sibling priority if they have a sibling at Sythwood Primary School who will still be a pupil at the school when the sibling starts.

Children of all staff (teaching and support) who have been employed at the school for more than two years, or who meet a skills shortage.

Within the admission arrangements the child’s home address excludes any business, relative’s or childminder’s address and must be the child’s normal place of residence. In the case of formal equal shared custody it will be up to the parents to agree which address to use. In other cases it is where the child spends most of the time. In order to calculate your child’s nearest school all distances will be measured by the computerised Geographical Information System maintained by Surrey’s Admissions and Transport team.

The address to be used for the initial allocation of places to Reception will be the child’s address at the closing date for application. Changes of address may be considered in accordance with Surrey’s Co-ordinated Scheme if there are exceptional reasons behind the change, such as if a family has just moved to the area. The address to be used for waiting lists, after the initial allocation, will be the child’s current address. Any offer of a place on the basis of address is conditional upon the child living at the appropriate address on the relevant date. Parents have a responsibility to notify the school/Surrey County Council of any change of address.

Where there are more applicants than places available, waiting lists will operate for each year group according to the oversubscription criteria without regard to the date the application was received or when a child’s name was added to the waiting list. Waiting lists will be maintained until the end of the academic year for which entry has been sought.

Parents wishing to remain on the waiting list in 2021/22 must apply via the school’s in-year admissions process which is maintained by Surrey County Council.

Surrey County Council has a Home to School Transport policy that sets out the circumstances that children might qualify for free home to school transport. Generally, transport will only be considered if a child is under 8 years old and is travelling more than two miles or is over 8 years old and travelling more than three miles to the nearest school with a place. Transport will not generally be provided to a school that is further away if a child would have been offered a place at a nearer school had it been named as a preference on the application form. Eligibility to transport is not linked to the admission criteria of a school. A full copy of Surrey’s Home to School Transport policy is available on Surrey’s website at www.surreycc.gov.uk or from the Surrey Schools and Childcare Service on 0300 200 1004. For more information about school transport please click here.

Choosing a school for your child can be a daunting process with many schools to choose from. Between October and January each year, we would usually run school tours for small groups of parents to see what we have to offer your child. Unfortunately, due to the current unprecedented circumstances relating to Covid-19, we will not be able to run tours in our usual way this year.To help make your decision easier we have various other ways in which you can find out about and see our school.

This year you can discover more about Sythwood Primary and Nursery School through:

Booking for these is now available at the bottom of this page. Alternatively, you can call our school office on 01483 770063. 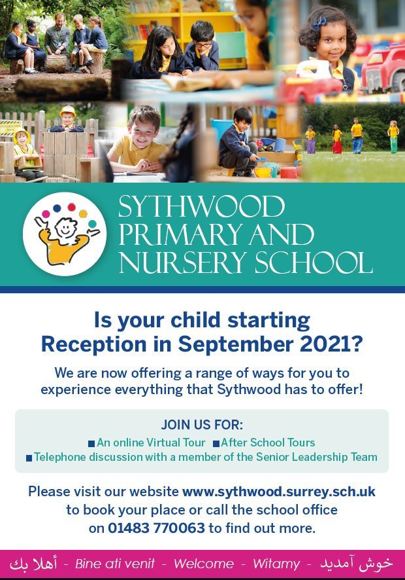 Getting Ready for School

If you'd like information on what you can do to help your child start school, the Surrey Family Information Service have produced a 'Getting Ready for School' booklet which you may find useful.

The booklet includes information about:

For more advice and support on applying for your child's school place please:

Your browser is out-of-date!

Update your browser to view this website correctly. Update my browser now

*
Cookie Notice: We use cookies on this site to improve your user experience.
Accept Find out more